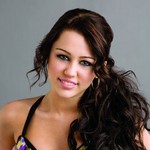 The 21-year-old pop star shared a steamy photo of herself on Twitter Thursday, after Brooke posted a snap of their evening together, captioned simply: "Yum."

Apparently Brooke recently signed to Rca, and Miley just wanted to make sure she felt like a part of the family.

It's unclear when the photo was taken.

Miley's smooch came just days after she caused a stir by locking lips with Katy Perry, who came to see the singer perform a concert from her Bangerz Tour at the weekend.

Miley was in the middle of performing her track Adore You when she saw Katy in the crowd and leaned in for the embrace.

"I just kissed a girl and I really liked it a lot," Miley later shared of their moment together, referencing Katy's smash hit I Kissed A Girl.

Miley's raunchy behavior has made her the subject of intense scrutiny in recent months.

The former Hannah Montana star's name has also been dragged into the recent controversy surrounding Robin Thicke and Paula Patton's decision to split after nearly nine years of marriage.

Although Paula publicly defended Robin at the time, apparently the couple's relationship was tested by his MTV Vma performance last year with the Wrecking Ball singer, when Miley infamously twerked on the married star.

"The Miley Cyrus fiasco was a big test of their relationship," a source told Us Weekly.

"He asked her to help him out as a friend and a wife, and defend him and the performance. He begged her to speak out for him and be there for him. She agreed to be the good wife after he begged and pleaded. Then he asked her to stick with him through awards season, and she agreed. She attended the Grammys with him as a favor."